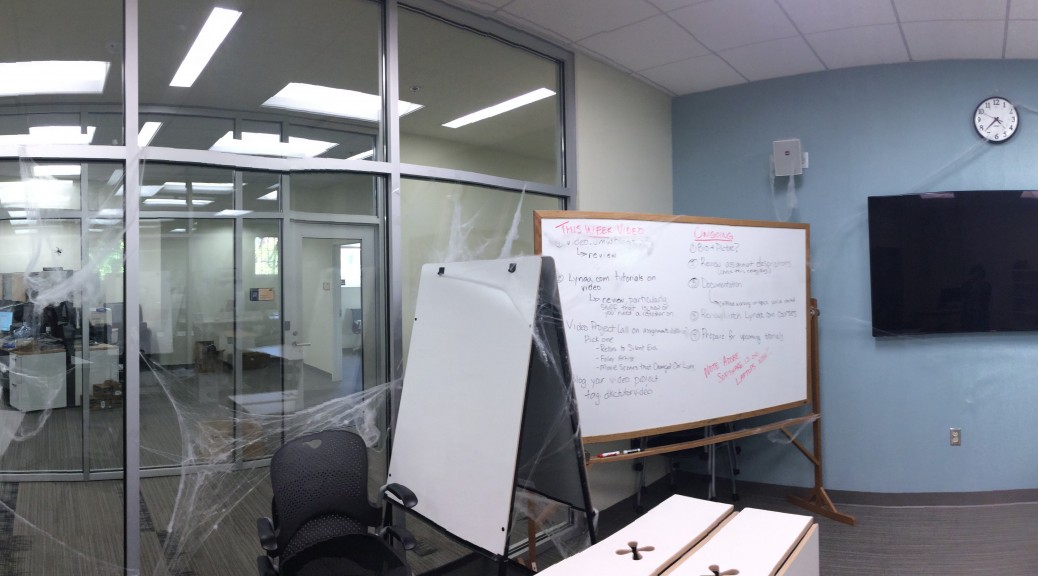 It’s been months since I’ve posted anything on this site, but this time I can honestly say I think I have a pretty good excuse.

This summer, DTLT relocated to a brand-new building, UMW’s Information & Technology Convergence Center. I attended my first meeting about this building in spring of 2008, so it’s fair to say that the opening of this space has been a LONG time coming.

Moving our offices was complicated enough; in addition, DTLT played a pretty large role in helping the building get up and running (and, honestly, we’re still getting some stuff up and running). None of us were really sure what the move would be like and how the new building was going to shake out in the first few months. In the end, I’m glad we didn’t try to imagine what it would be like, because I’m not sure anything would have prepared us for how complex and exhausting the move would be — and how exciting and rewarding. I think it’s fair to say that generally people around campus love the Convergence Center, and we’re thrilled to be just one of the occupants of the building.

To make things more complicated for me, personally, the day before classes started we finalized a plan for me to move into a new position at the University running a new center.

The Digital Knowledge Center is a place for UMW students to get peer tutoring on digital projects, and it’s another project that has been many years in the imagining and making. It was originally a QEP proposal that Jeff McClurken and I along with several others worked on in spring 2011. It wasn’t chosen as our University’s QEP, but it is gratifying that three years later our administration believed enough in the idea to find the funding to make it happen.

The Center came about too late for us to work it formally into the design of the new ITCC, but my gracious colleagues agreed to “sacrifice” a planned conference room attached to our office suite so that we could have a physical space for the DKC. The room presents some challenges (particularly sound control when multiple tutorials are happening at once), but I can’t complain. We have a home. 🙂

I was also INCREDIBLY lucky to hire six amazing students to start as the first cohort of tutors in the DKC this fall. Several of them started as aides at the ITCC’s Information Desk and then decided to move into the Center when I was ready to start hiring. All of them have taken various classes with Zach Whalen, Jeff McClurken, and Jim Groom over the years, and they come with strong existing technology skills, but,  more importantly, with a natural curiosity for learning new things and and the instincts for helping others to use technology.

I’ve felt, perhaps more than ever before, like I’m building the airplane while in flight this semester. Ideally, we would have finalized the details of the Center last spring and I would have spent this summer developing a training curriculum, hiring and training tutors, and generally, preparing to administer and manage the Center. I have strong type A tendencies, and the drawback is that sometimes I want to organize, administer, and prepare more than is healthy. The lesson this fall for me has been that in the chaos of the building opening, switching jobs, and trying to get the Center running, I’ve still managed to land in a place where I think we’re on a solid road to offering a great new service to students — and have lucked into finding a great group of students to begin this journey with me. I’m not sure that it could have turned out much better if I HAD had the luxury of months of preparation and planning.

The tutors started working on September 29th, so we’re just finishing up the fourth operational week of the Center. For the first three weeks I was relatively quiet about the new service, wanting to give the tutors some time to get trained on a few things that they were unfamiliar with. During that time, I worked with my colleagues in DTLT to reach out to faculty whom they were working with to extend targeted invitations for students to come in for tutoring on specific projects. But after a few weeks of watching the tutors begin to offer the service to this bounded group, I realized that I was being over-protective. There was no real reason to avoid announcing the Center more broadly.

So this Monday I sent out an email to all UMW faculty, inviting them to share information about the Center with their students. Next week it will get announced more broadly to all students in a campus newsletter. Tutorials have been gradually picking up, and just this week (after talking with the tutors) we added two new tutorial  “types” for Zotero and Google Drive.

One thing that the switch to this new position means for me is that I’m basically moving away from the role of faculty development almost entirely, focusing instead on the student support that comes AFTER that development. It’s a bit jarring to realize what a big change that represents for me and the work that I do, but I’m also incredibly excited about what it means for DTLT more generally to be able to tell faculty that, yes, we do have a place for their students to come and get help — and to believe that we can scale that service to meet the needs of the faculty we work with.

I hope that now as things begin to settle down I’ll be sharing the work of the Center — and what starting a new service like this entails — in this space. Stay tuned.