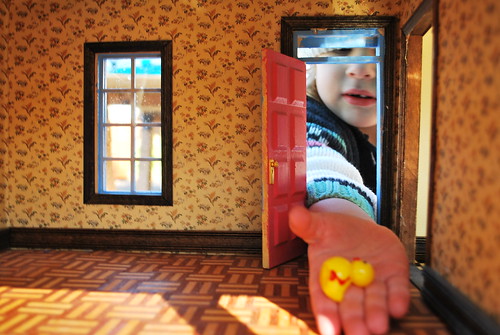 Tomorrow morning, I have the privilege of presenting (virtually) to a group of faculty at Wooster College as part of their participation in the 2012 Instructional Technology Faculty Fellows program. I’m slated to speak about “Extending the Walls of the Classroom with Technology” (and, perhaps, breaking down the walls).

I’ve been mulling the presentation over for weeks, but with Faculty Academy, bushwacking around Camp Magic MacGuffin, and catching camp plague last week, I’ve only been able to start really pulling my thoughts into something coherent over the last few days. (Shhh. . .don’t tell anyone but I’m a notorious procrastinator when it comes to presentation prep. I think I do my best work under pressure.)

The title of my presentation is “Doorways: Opening, Extending, & Multiplying the Course.” I’m going to start by telling a bunch of stories about the effect openness has had at UMW, especially through serendipitous contact made via student work on UMW Blogs. We’ve got some great examples of students being contacted by the very people they are studying and writing about, so this is always fun to talk about. In my mind, this kind of openness would be considered, more or less, passive. I’m not using passive in any kind of derogatory way. Rather, I’m suggesting that the faculty who teach the courses where these kinds of encounters have occurred haven’t actually sought out responses from anyone. Rather, they just valued the idea that students should work in the open, on Web sites that are indexed and searchable. Once you’re publishing in that space, you’re bound to have a few magical encounters. That’s kind of the beauty of the Web, eh?

From there, though, I want to talk about active openness — when faculty solicit and encourage interaction from outsiders within the classroom experience. For this I’ll be talking a lot about DS106, and Jim’s initial experiment in spring of 2011 to invite the world into the classroom at UMW. There’s lots of serendipity that occurs in these situations, as well, but there’s probably a better chance that someone will make a connection, since we’re actively encourage those connections among and between UMW and open participants.

I think most faculty will be able to wrap their heads around the notion of passive openness — simply open the doors and someone is bound to wander in.

The bigger challenge is to get them thinking about active openness. How do you go about inviting the world into your classroom? Who do you invite? How do you send the invitation? What do you ask them to do when they get there? How do you know if it’s “working?” And, most frightening of all, what do you do if no one shows up at the party? That’s a bummer.

Jim and I have talked in the past about how the success of DS106 rested in no small part on the strength of his network going into the experiment. He had spent years building and cultivating connections through his blog and Twitter. He had built some capital among that network by regularly sharing and contributing his ideas, becoming a member of a virtuous circle of sharing and using. Moreover, the people he was connecting with were the kinds of people who would be interested in participating in an open digital storytelling course.

Not everyone has this kind of network to tap. In fact, most people don’t. And building that network isn’t something that happens overnight, or certainly during a 30-45 minute hands-on session that I’ll lead for Wooster College tomorrow!

I had a few ideas of how I’d get them to at least engage with the idea of building a network, primarily by using Twitter. But a quick check with the organizers indicated that only a few of the participants are already using Twitter, and the rest are *not* interested.

So, an idea I had was to first talk to the participants about themselves and their professional/research interests. Then, I thought I might put out a series of tweets tomorrow morning asking people to help me find others on Twitter who share those interests. I’m wondering if after 60-75 minutes (when I’ll be done with my formal presentation), my network can expand enough to yield some results.

The risk, of course, is that it won’t work, and I’ll have not proved the value of Twitter. That would be sort of. . .unfortunate. I could do it without telling the participants I’m doing it. But would that be too underhanded?

I’m looking for any and all feedback or additional ideas! And, most of all, would you be willing to help me spread the Twitter wildfire tomorrow morning to see if we can quickly build the beginning of a professional network for a group of faculty at Wooster?

3 thoughts on “Woot! I’m Talking about Openness to Wooster!”