People who follow me elsewhere on the Web know that a few months ago, our family acquired a new member. We call her Moby (Which doesn’t make any sense because, obviously, she’s a girl. But it fits.) 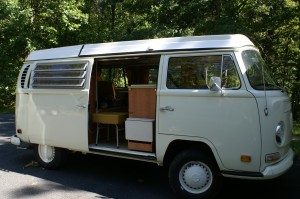 Erik grew up rebuilding VW buses, and he’s longed for one since he had to sell his last one before moving across the country for graduate school. This summer we decided to take the plunge, and we ended up with Moby.

When Erik’s birthday came around, it was inevitable that everyone would buy him VW (bus) related stuff. As I was searching for presents, I came across this book on Amazon. 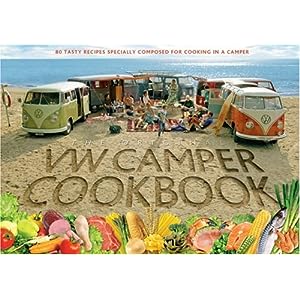 When I saw one recipe in particular, I knew I had to buy it: 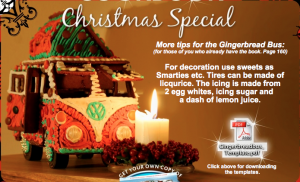 That would be a recipe to build a Volkswaben Gingerbread Bus. The book basically contains a recipe for gingerbread. But on the cookbook site, you can download gingerbread bus plans.

When the holidays came around, Erik and I had to build it. We ended up making two buses, because we knew Madigan would want to decorate one, and we wanted one to decorate ourselves. For Madigan’s we followed the plans and made an early-model “Splitty” VW camper bus. For our bus, we modified the plans to make a “Westy” bus like Moby.

It took about two nights to cut out and bake our buses. Putting them together took another two nights. Instead of using traditional icing to assemble them, we used the cookbook’s advice and melted sugar. It’s a much nicer “glue” — if you keep the temperature consistent, the color matches the gingerbread almost exactly. It cools very quickly though, so you have to work quickly. In the end, both of the buses went together pretty well considering we had no idea what we were really doing.

But the night that we finished the second one, Erik was handling it and broke the entire front end. Rather than cursing the gingerbread gods, we realized we now had to stage a gingerbread bus crash.

When we finally found the time to tackle the project, we spent about two hours putting it all together. With the help of our Playmobil collection, I think it came out pretty well. (The first few shots are of the final, fixed, decorated buses — note the apricot fruit-roll-up for the canvas top. Brilliant.)

(The best part of this, IMHO, is the inane Playmobil characters who can’t stop smiling at the carnage. The cow, BTW, caused the entire accident. Damn livestock.)

My husband shot the photos, and ended up sharing them on Facebook. As we were finishing up the photo shoot, I asked him if he would have bothered doing any of this if he didn’t have a place like Facebook to share it in. His reply was, “Of course not.”

I had been thinking the same thing, and it struck me how deeply this idea of “an imperative of audience” influences the kinds of activities I’m hoping to foster in Digital Storytelling. One of the cultural movements I want us to consider is the way in which digital tools and the open Web are not only making it possible to create and share our stories but how they are creating a virtual stage upon which we are compelled to perform.

6 thoughts on “The Imperative of Audience”