For a while, I’ve been admiring Barbara Ganley‘s ability to use her blog as as space to pull together threads from so many aspects of her life and work. In that spirit, after just spending a week pretty much off the grid in West Virginia, I thought I’d take a brief interlude to reflect on that experience. . .

A few weeks ago (days before Faculty Academy — what was I THINKING), my husband and I decided to take the plunge and finally get the puppy we’ve been talking about getting since, oh, as long as I can remember. He’s taking the summer off from teaching to tackle some projects around the house, and this seemed like the perfect opportunity to introduce a new member to our small family (plus, there would be more time for training and undivided attention). 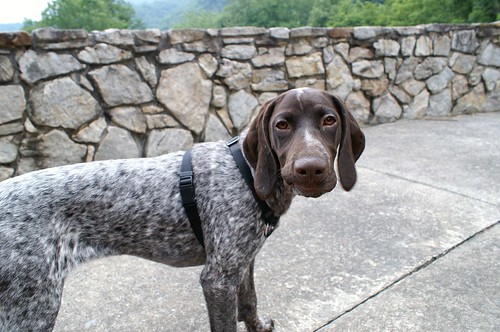 She’s a sweet pup, to be sure, but a handful. And her arrival on the scene (a bit earlier than we had planned) threw our vacation plans for the summer into a bit of a tailspin. We had been planning a long-anticipated trip back to Montana to visit old friends and haunts, but with Kila in the mix, we needed something closer to home and pet-friendly.

We settled on a cabin in West Virginia, in an area known as the Mountain Highlands. Through the internet we located the North Mountain Cabins. Every time we go through the adventure of finding a travel destination on the internet these days I wonder how people ever did this before the Web. . .

The last few weeks prior to the trip have been a whirlwind of activity at work and at home. We’re deep in summer projects in DTLT and on the homefront, Erik’s been installing hardwood floors and screening in our gazebo (I helped with that one, a little :)). With all the activity, we found ourselves pulling out of the driveway last Sunday with little real knowledge of what we were going to find in the Highlands, no idea of what activities would be 2-year-old and puppy friendly, no real concept of where the closest grocery stores were, and absolutely no clue about whether we’d have internet access.

Ha! Internet access! As it turned out, I was lucky to have cell phone coverage for five minutes a day.

In anticipation that we’d be pretty isolated for the week, I decided the night before the trip to turn on cell phone updates for Twitter. I added additional text messaging to my plan, activated the service, and waited to see what would happen.

As we drove west, the farms of western Virginia gave way to the hills of West Virginia, and by the time we hit highway 81, my cell phone had stopped tweeting. Driving through roadcuts on a fancy new highway in WV that goes from nowhere to . . . nowhere, Erik commented that he really needed to take some pictures of the rocks. He managed to hold off until the trip home, showing admirable restraint.

After about two and half hours (and MANY listens to Track 9 on the Cold Mountain soundtrack — my daughter’s favorite), we reached our cabin. It was nestled on a small hill overlooking a horse pasture. 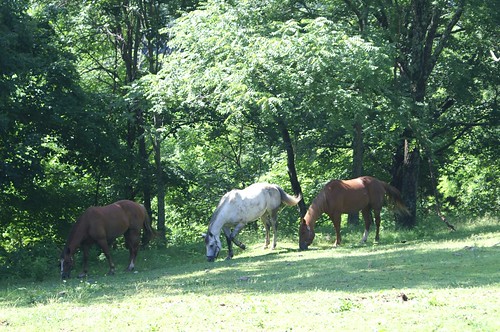 In between feeding the horses carrots and lounging around on the back deck eating blueberries and sampling the local beer, we took several hikes. It’s been a couple of years since we’ve been out on the trail, and it felt great. Madigan took to her pack like a trooper (even deigning to take a nap or two). 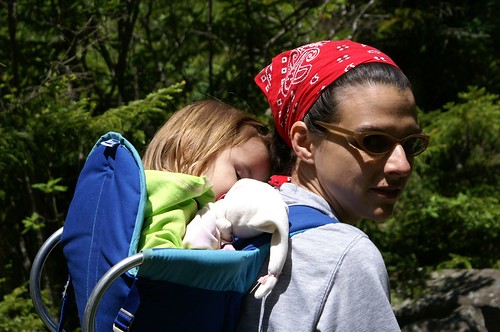 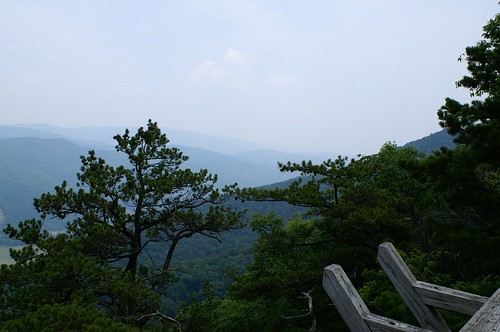 Meanwhile, in between drives from our cabin to Seneca Rocks, Dolly Sods, Petersburg, Franklin, and Spruce Knob, I would for a minute or two find myself in cell range, and my phone would start vibrating like crazy. In those brief moments, I’d get 70 tweets or so downloaded, and, then, before I could possibly text a response of my own, the signal would be gone and the phone would go silent.

I found myself furiously reading through those small, fleeting digital offerings. I also started experiencing a weird sense of time shifting. Since I could only get about 70 tweets before filling up the pathetically small memory on my pathetically out-dated phone (While reading up on some features before the trip, I discovered on Cingular’s site that my model is considered “obsolete.” Ouch.), I was always a few days behind my Twitter friends. It was like living in two time zones. On Thursday I was reading about Monday’s activities. And when I managed to sneak a tweet in on Tuesday, it wasn’t until Friday that I finally received a response. I actually started to feel a little uncertain about whether or not time had somehow sped up or slowed down for me . . . Then, on the drive home, as the cell signal strengthened and tweets started arriving more regularly, I watched as those two time zones sort of re-aligned. Time caught up, the tweets slowed down, and the conversation started to match the clock. (At the same time, I felt weirdly disappointed when the twittering evened out. There had been a certain rush to getting all that digital juice in one big, 70-message gulp.)

Aside from hiking, driving, and twitter gulping, I did catch up on some long overdue reading. The only book I managed to finish was Rebekah Nelson’s “My Freshman Year.” If you work in higher education, you should probably read this book. While it’s by no means a definitive or comprehensive anthropological study of the college student (Nelson doesn’t claim it is), I think it exposes some critical questions we should be asking ourselves and our students about the mission of higher education.

One of the themes that kept popping out to me as I read (and that also resonated in a recent post of Laura‘s) is the issue of “careerism” and the increasing tendency for students to come away to college or university with preparing for a career as the ultimate goal. There are all kinds of pressures contributing to this trend, but I have a sense that it’s at the heart of a lot of the disconnects we witness between the lofty aspirations of higher education and the actual practices in which students engage.

What’s particularly interesting to me is that I never came to college with “finding a career” as a goal. And that’s not because I didn’t think having a career was important — rather, I was just raised to believe that college was about finding OTHER things: myself, my passions, my strengths. My parents drilled into my head that if I did something I loved, everything else would follow. I don’t think most students have that mindset — or perhaps they don’t have the luxury of that mindset?

In several anecdotes, Nathan highlights how colleges and universities are regularly sending mixed signals to students about what their own mission: are they here to learn/explore/discover/grow? Or are they here to network/build resumes/prepare for tests/learn how to play the system?

In any case, it’s a fascinating (and, honestly, often depressing) read.

On Sunday, we repacked the van and made our way home. This time I couldn’t escape the requisite roadcut stops. 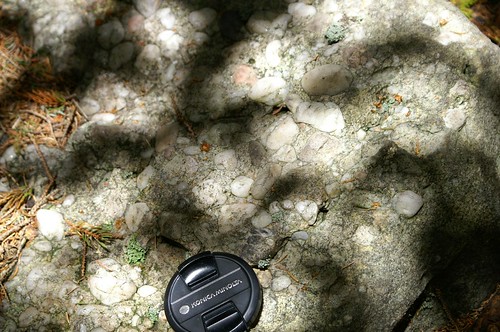 And, of course, the lens cap is there for scale. As the daughter of a botanist, I grew up with photo albums filled with pictures of flowers and plants next to lens caps. I’m all grown up now (sort of), but now the lens caps just sit next to granite and gneiss. Life is funny, no?