So, many, many months ago I read this article in the NYT about Second Life and the possibilities of using this virtual world for educational purposes. I was intrigued.

Last spring, I finally signed up for a membership on SL, but was distracted by Real Life (read: maternity leave) and never really got back into it.

Then, a few weeks ago, Rachel Smith from the New Media Consortium joined us for Faculty Academy 2006 and gave a wonderful plenary session on “Gaming and Education.” Among other things, the presentation included a foray into the NMC’s new virtual SL campus. I was hooked again.

For the last few weeks I’ve been exploring SL again. The experience has been pretty fascinating. It’s not hard to imagine how a flexible world in which you can literally create anything — including a new identity for yourself — could be a powerful tool for all kinds of activity.

What’s immediately evident as soon as you begin to explore SL is that the majority of residents have decided to use that power for monetary gain and, um, how shall we say this, “earthly pleasures.”

In fact, the abundance of casinos and clubs is sort of overwhelming. Invariably, if I search in world for a popular place to go (figuring there must be something of interest there), I come across loud techno music and virtual slot machines. Trying to find something innovative, creative, and, perhaps, cultural, in SL is a challenge. I came across a thread on the official forums addressing just this problem:

Ive been in SL for almost a year. In this time I have seen that in Second Life almost anything can be made. The Lindens make well on their claim that the only limit is your imagination. Second Life therefore has limitless potential.

So why in the heck is Second Life comprised almost entirely of clubs (aka “Shiny boxes with lights), stores, and the occasional casino. Sure there are a few rare exceptions but overall Second Life needs Originality and at least some culture, very very badly.

What I guess im trying to say is; you can do anything in Second Life, so why dont we see more originality? Is that so hard?

The responses to this question are interesting. Some point out that if the resident wants to see more interesting, creative builds in SL why doesn’t she make them herself (Answer: Building anything very big in SL is expensive. Land costs money. Also, you need to have some expertise in a variety of topics: 3-D drawing and animation, scripting, etc.) Others point out that there are lots of interesting places in SL, but finding them is just hard. You literally have to just jump in and start exploring. And the world is big. It also sounds like some of the more interesting spots have dissapeared (I assume leases/accounts expired). 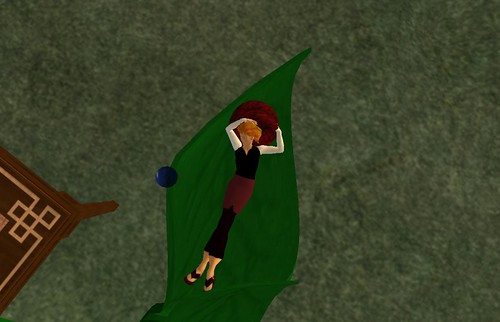 It’s sort of strange that Linden Labs (the company behind SL) hasn’t done more to highlight the existence of these spaces in-world. I mean, even in RL we have maps and guide books. You can search for places within SL, but not for a particular subset of cultural or artistic venues–at least not that I’ve found. Someone tell me if I’m wrong!
Also, it sounds like a lot of these spots that do exist are private. I certainly understand the need for privacy. NMC’s campus is private for good reason. People engage in some pretty extreme behavior in SL, and sometimes it’s necessary to have spaces that are protected from that. But, I don’t want to engage in that behavior, I just want to see cool stuff!

Another thing that has struck me is the poor design of so many of the spaces people create in SL. It seems like they’re so obsessed with making the spaces reflect what they’re used to in Real Life that they forget the experience of moving around SL is entirely different. Comfy couches and chairs in stores (which might be a welcome spot to rest in RL) are just obstacles to moving through space. Sure, sometimes it’s nice to sit down and take a look around, but, for the most part, I’m in SL because I want to move and explore! (Note Exception: Sometimes I do like to sit down in SL, but I choose my spots carefully. See pictures.) It’s worth noting that I think NMC’s campus is an exception to this rule — they’ve done a great job of laying out spaces that are open, airy, and easily experienced.

There are also some weird limitations that exist in terms of the SL experience itself. For example, I really want to add my colleagues in DTLT (who have SL accounts) as “Friends” in SL. Figuring out how to do this has been a challenge (documentation, which is mostly in the form of a resident-created wiki, is pretty thin and often out-dated). As it turns out, the only way to add a Friend is to find them in-world. But, there’s no easy way for me to be notified when these people are online. I have to keep searching for them until their status changes. Pretty inefficient. 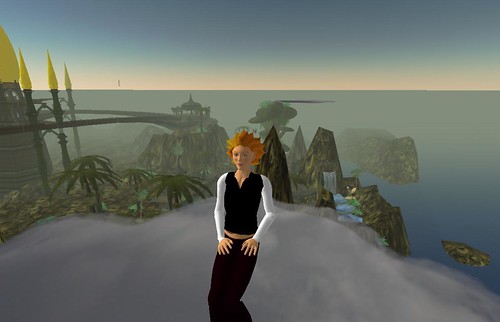 In a way, this interface decision seems to value a particular kind of interaction — meetups between strangers that are spontaneous and unplanned. I get that. Those kinds of interactions are important. But, what if I have a group of friends who I can’t regularly meet with in RL, and I want to use SL as an alternative. Figuring out how to do that actually means planning a virtual meetup. If I had the time to do that, I’d just call them up and meet for coffee!

The monetization of experience is a HUGE component of SL. I gather there are people who actually earn a living designing and selling clothes, houses, furniture, accessories, body parts, etc. in-world. And there are stores (filled with large couches that I always bump into) selling this stuff everywhere. But finding out who sells what is a ridiculous process. Sure, I can search in-world for an item I’m interested in, but unless that particular item is listed in the store’s description, I may not find what I’m looking for (even though it exists). The forums have a particular “Classified” thread where it’s possible to list new items you’re selling, but it’s not exhaustive, it gets outdated quickly, and it’s just a silly way of trying to find what I’m looking for. A few vendors have set up regular Web sites listing the items they sell, but again, these aren’t exhaustive and often have weak search capabilities. Perhaps I’ve missed something somewhere, but it’s like people don’t want me to find their stuff to buy! And I really want to buy stuff, people! How about some kind of voluntary catalog that vendors can import their inventory into?

Maybe it sounds like I don’t like SL. I do. I really do. I’m just amazed at how some things that seem like obvious additions to the experience don’t exist. And I”m sure there are more. It’s not surprising, really. We’re talking about building a virtual replica of. . .the world. The challenge there extends beyond creating water and trees and land. It even extends beyond giving residents the ability to build houses, objects, or themselves. In RL we’re surrounded by all kinds of filters that aide us as we try to make sense of existence: maps, guides, catalogs, friends, communities. . .The development of those aides has been organic — driven by human need and ingenuity. I guess, in a way, Linden Labs is in the position of having to engineer that development, and it’s not suprising that some things that seem obvious to me don’t exist (or don’t exist yet). The process, when you think about, is beyond daunting.

4 thoughts on “A Second Lifetime”